Home › Articles › Africa’s Future Lies in Trade Not in Aid!

Africa’s Future Lies in Trade Not in Aid! 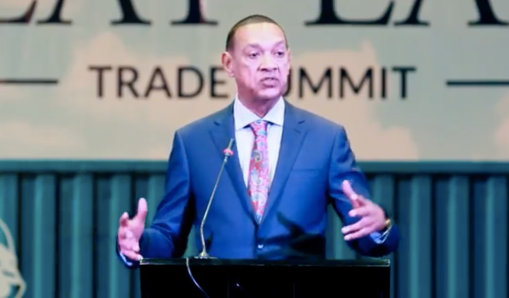 I observer this trend as a businessman in the private sector and I went into politics to change it.

Before I could change this paradigm, I had to find out what was causing it. My investigations identified poverty as the factor that drove this behavior.

But what causes poverty? How many books have been dedicated to that question. How many university departments have been set up to answer it. But it is the wrong question.

If you think about it, poverty is the original state of every creature on this planet, including us. For most of human history, we were hunter-gatherers, living hand to mouth. We may have been free, but we were hungry.

The real question isn’t what causes poverty. It is what causes wealth. We find the answer in our history.

Until around 300 years ago, almost everyone was on this planet was poor. Setting aside a handful of kings and aristocrats, the rest of us bent our backs in the fields for a mouthful of food. That was true whether we lived in Nigeria or Russia or Mexico or Burma.

But 300 years ago, a miracle started. A miracle that was expressed through secure property rights, free trade and specialisation. People learned that, if they concentrated on what they were good at, and bought what they needed, everyone became better off. And as global trade spread, and more people got involved in more complex chains of production, the miracle intensified.

So let us ask a different question. Why was the creation of wealth so patchy? Why is there such a divergence in living standards between different parts of the world? Why is my homeland of Nigeria, a land blessed with natural resources of every kind, so much poorer than, say, New Zealand?

There are lots of theories. During the colonial era, many African states were treated as suppliers of raw materials. Even now, we are to some extent kept in that condition by tariffs and quotas imposed by richer countries.

Some colonial powers put repressive legal and political institutions in place to deal with the independence movements. When the first independent governments took over in the 1960s, they kept those institutions. Like most governments in most places, they were happy to run centralized and authoritarian states if they could get away with it.

Perhaps Africa was also unlucky in the timing of independence. The 1960s were the era when Big Government was in fashion around the world. Many African leaders had learned the latest socialist theories at Western universities.

Nationalisation, import substitution, autarky, price controls – these crazy ideas were all the rage back then.

Some African leaders went further, allying with the USSR. Today, the economic disasters and the political crimes of the USSR are obvious to us. But, in the 1960s, it was still – just – possible to admire what looked like the successful industrialization of the Soviet economy.

And so, for many years, Africa stood aside from global markets. And, in consequence, we stood aside from the global enrichment of the post-war era.
In Nigeria, we had an additional problem. We came to rely on a single commodity. Until the 1970s, Nigeria was a food exporter with a growing textiles industry. But we allowed ourselves to become dependent on oil. And when, as now, as the price falls, our politicians can be relied on to make a bad situation worse.

The one thing they haven’t tried is the structural reform that will make trade easier, cut prices for ordinary Nigerians and so put more spending power into the economy.

Think what those numbers mean for the poorest Nigerians, who have to devote the majority of their income to food purchases.

Or, to turn it around, think how much we could stimulate the economy if we let Nigerians spend more of their money on other things.

Because despite our politicians, my people are great entrepreneurs. The proof of their enterprise is that they continue to succeed despite hopeless, corrupt and self-serving regimes.

Nollywood, an initiative of Nigeria’s youth which blossomed without any form of governmental support until 2011 when former President Jonathan gave them a grant of $20 million, now makes up almost 2% of Nigeria’s GDP of half a billion dollars.

Lagos, another success story, is one of the world’s fastest-growing cities. If it were a country, its economy would be the seventh largest in Africa.

That is how much smarter entrepreneurs are than regulators. That is why I would put my trust in the people, not the government.

But if Africans need to reduce trade barriers, so do Europeans. Colonialism may be finished, but many in Brussels still think of Africa as a source of commodities.

Here is what I mean. The EU is happy to import unprocessed green coffee from this continent. But it charges tariffs on roasted coffee. All the value added is reserved to Europe. To give you an idea of how much we are talking about, let me quote a study by Professor Callestous Juma of Harvard Kennedy School.

Africa – the entire continent, all together – earned $2.4 billion from coffee exports in 2014. That year, Germany alone earned $3.8 billion from coffee re-exports.
It is the same when it comes to cocoa. We can sell cocoa beans to Europe without any taxes. But if we try to turn those beans into powder or chocolate here, the tariff can be 30 per cent or more.

And it is not just tariff barriers. Arguably even more damaging are the protectionist measures that the EU puts in the way of new technology. For example, here in Uganda, scientists at Kawanda Agricultural Research Institute are working on a genetic solution to banana wilt, which causes half a billion dollars in losses in the Great Lakes region. But they are up against the EU’s hostility to GM imports.
In the same way, in my own country, a team at Ahmadu Bello University has developed a GM solution to the loss of black eyed peas to moths. But there is no point in our adopting the technology if it means being frozen out of EU markets.
So what is the solution?

First, and most obviously, we Africans need to be grabbing the opportunities offered by Brexit. The United Kingdom is, by history and inclination, the greatest free trader in the present EU. And Britain does not have the same industrial and agrarian interests that drive protectionism on the continent.

Earlier this year, I called on the Nigerian Government to pursue a Big Ambitious Free Trade Agreement with Britain. Like many African countries, we have a diaspora community in the UK, as well as links of language, common law and similar commercial practices that ought to facilitate trade and investment.

But trade agreements won’t happen on their own. We need to make sure that Britain is removing obstacles to trade – and that we Africans are reciprocating. Trade barriers hurt everyone. Yes, they hurt the exporter who is denied a market. But they hurt consumers in the protected country even more.

We need to be trading more with one another. Here in East Africa, regional trade has started to happen. Yes, the countries here still sell tea and coffee and cut flowers to Europe. But nearly half of Kenya’s exports, for example, now go to other African states.

Above all, we need to get away from the idea that free trade is somehow a Western imposition or a legacy of colonialism. It was that thinking that led so many twentieth century African leaders down the disastrous road to socialism, collectivism and penury.

If you really want to identify a legacy of colonialism, it is not free trade. It is the opposite: a trade policy that discourages industrialization and specialisation.
Africa deserves better. Africa expects better. Now is our moment.

We cannot waste precious time having an intra continental argument on who makes the best jollof rice in Africa or whose music sounds better than the other!

Time is the most valuable commodity this side of eternity and our time is far better spent working out ways whereby we can unite our people and our governments to approach blocs like the EU and the Americas as one and demand a better and fairer system of trade.

• Murray-Bruce represents Bayelsa East in the Senate and is the Chairman of Silvebird Group. He presented this speech at the Great Lakes Trade Summit in Kampala, Uganda

Like Loading...
‹ Video: We either restructure Nigeria now, or we go bankrupt in less than 20 years!
Are you not fed up with the hard times? ›